After a long hiatus, here’s my first game of Bolt Action for 2018. On the other side of the table was Andrew, and both of us were eager to avoid the stalemate experienced in our last battle (Soviet vs IJA)

The Battlefield and Mission 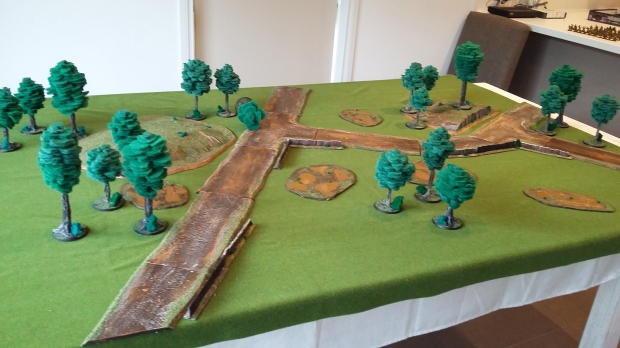 Andrew had recently acquired the Road to Berlin campaign book, so we decided to play the Battle of Pleshchenitsy. The scenario calls for a battlefield of dense woodland and shallow marshes. Lacking the latter, I quickly got some together that day (I’ll post up about these in the Future).

In addition, Soviets get a bonus to forward air observers (which the Germans are denied taking). Had I known this beforehand, I might’ve taken one, but probably not. The battle also lasts 8 turns with possible 9th and 10th turns (which neither of us realised till the end of turn six!) 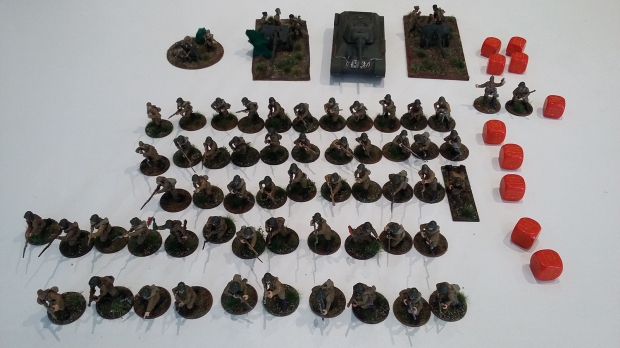 Andrew fielded a 1st Lieutenant with one staff, two Grenadier squads with 10 men including LMG, a sniper team, two MG-42 MMG teams, a Pak40, Schwimwagen, and a Panther (not sure on the variant).

Andrew deployed one Grenadier squad to the right of the forest on his mid-right flank. In the forest he positioned an MG-42 and the Pak40, as well as the Lieutenant. Just left off centre was positioned the second MG-42, with the sniper team in the forest on the ridge. All other units began in reserve.

I elected my T-34/76, tank riders, and 10 man LMG squad to be placed in reserve and out flanking (which the scenario allowed). Secretly I noted that the T-34 and tank riders would come on my right flank and LMG squad on my left. The rest of my force formed the first wave.

Before the start of the battle, a preparatory bombardment rained down on the Germans. The Pak and sniper team escaped without a scratch, the grenadiers and one of the MG-42s suffered one pin, and the Lieutenant and other MG-42 suffered direct hits! They received two pins and lost a man each – the Lieutenant passed his Last Man Standing/50% casualties from shooting test though.

First turn involved a lot of moving and not much else. One MG-42s both rallied (clearing all pins), and the other successfully went into ambush. The Lieutenant failed his order test to rally and went down. The Pak40 and sniper went into ambush, and the Grenadiers moved up and right towards the forest on Andrew’s far flank. 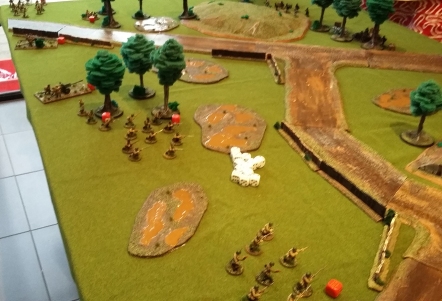 For my part, my first 11 man LMG squad came on the left flank and did the only bit of shooting for the turn, managing to pick off a Grenadier with sharp shooting from the DP-28. Next to them ran the Maxim, with the two Zis guns coming on centre left and just left of the forest in my centre. Towards the marsh in the centre right I ran my second LMG squad, with my conscripts to the right of them. 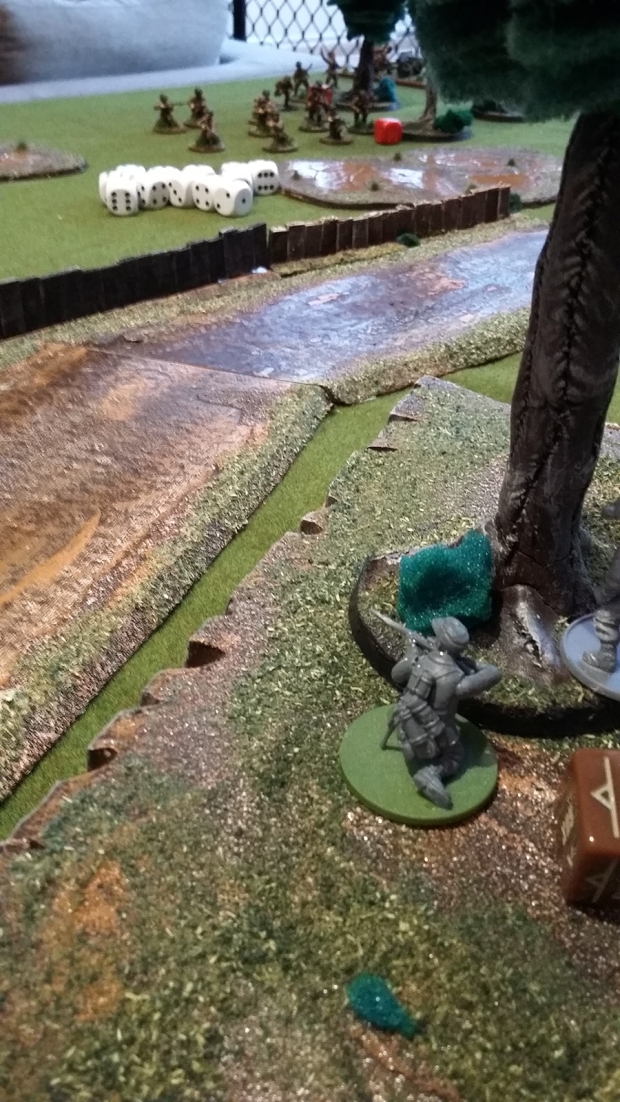 Turn 2 provided the first highlight of the battle. The German Lieutenant FUBAR’d his order test and fled to the back of the field. I then moved my LMG squad on the left up and shot at the Grenadiers again, once more causing losses. They failed their order test and went down when Andrew tried to advance them. 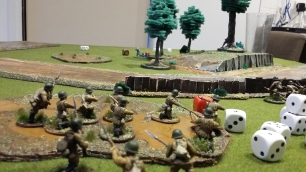 My Maxim and conscripts both moved up – which put the conscripts in spotting distance (just) of the sniper team. My second LMG squad moved up into the marsh, in response to which the sniper opted to take a shot and hit, but failed to score a kill. The MG-42s then all opened fire. The first failed to do anything, but the second dropped a couple of brave Soviet soldiers in the LMG squad.

Andrew opted to keep his Panther and Schwimwagen in reserve, but brought on his second Grenadier squad on his left. My Lieutenant dallied around in the forest in the middle.

Finally, my Zis guns tried to take out the MG-42 in the forest opposite and both missed. This would become a theme of the battle.

Turn 3 and the conscripts advanced, opening fire on the sniper team and scoring a hit! But failed to net a kill. The sniper decided to keep his head down afterwards, which pleased me greatly. What didn’t please me greatly however was how the two MG-42s once again opened fire on my LMG squad in the marsh. More kills and more pins meant they were down for the turn.

My LMG squad on the left continued its successful advance though. And my Maxim moved up beside them to provide support next turn. The Grenadiers were able to pass an order test pick off one of the Maxim crew though.

On the right, the Grenadiers advanced and were joined by the Schwimwagen, who both opened up on the conscripts. The good news was I didn’t roll a 1 on their Green test, the bad news is I didn’t roll a 5 or 6 either. Also, Andrew’s Lieutenant finally decided to rally.

Turn 4 and I was ready to bring my outflanking units on, now they could come on up to 36” in. the Schwimwagen got the first dice however and moved up onto the road, and lay into the conscripts. I tried to get them to run at the Schwimwagen in response, but they decided laying on the road was a better idea.

On the left, my LMG squad continued doing good work, before the first of my out flankers showed up. Bringing on my third LMG squad, I opened up on the weakened Grenadiers, seeing off the rest of the squad. My victory was short lived however as the Panther was next to arrive. Right next to my outflanking LMG squad. 12 MG shots, 11 hits, 11 kills. And the LMG squad was no more. 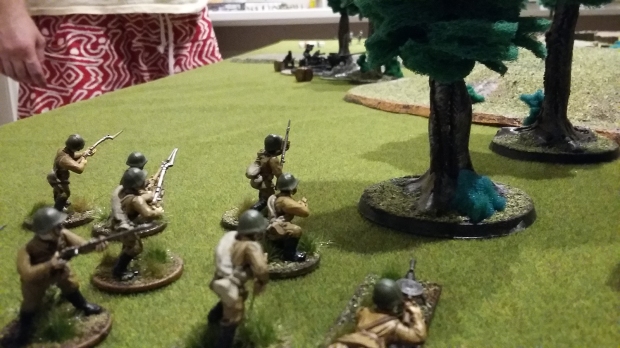 I was quick to respond though, bringing on my T-34 and tank riders. I knocked out the Schwimwagen with the main gun and put the hull MG into the Grenadiers. My tank riders them dismounted and opened up on the Grenadiers. This was a mistake, I should have assaulted. Andrew put the grenadiers down, and I scored less than 50% hits from my 20 shots and only a single kill!

Meanwhile, in the centre, things went as they had been. I put my squad in the marsh down as the MGs opened fire again. The Sniper decided to keep his head down once more, and my Zis guns both missed. Their ineptitude was Most Displeasing. 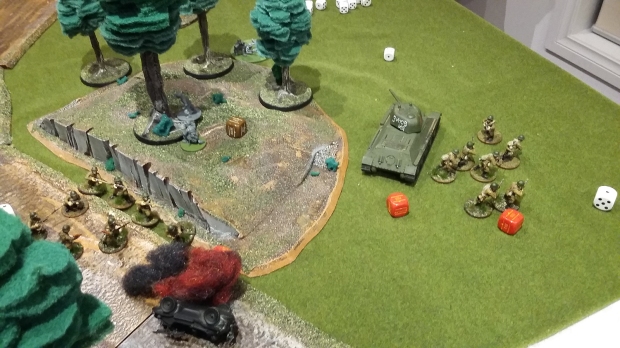 On the left, the Maxim decided not to run behind the hill away from the Panther and instead went down. Said Panther opened fire on the LMG squad on that flank. Having seen what it did to the 10 man LMG squad, I put them down. Meanwhile the conscripts decided to stop laying about on the road and ran along ridge beneath the sniper. 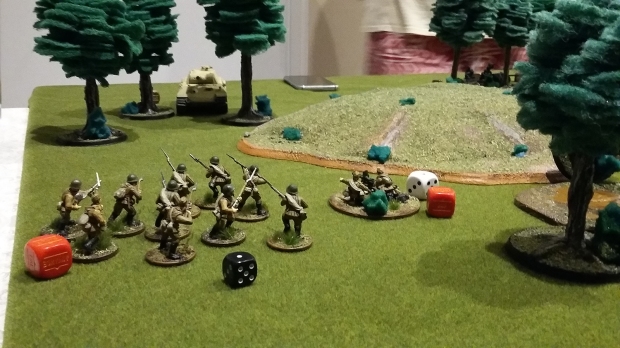 In the centre, things continued as ever. Machine gun fire rained down on the squad hiding in the marsh, and the Zis guns continued to be unable to hit the backside of a barn.

Turn 6 and the T-34 and the tank riders moved off the field. If I’d known it was an 8 turn minimum game, I probably would have kept the T-34 around, but it didn’t really matter. The conscripts passed their order test again, advanced, and opened up on the sniper. Not only did they get a hit, they scored a kill, and the sniper failed his morale o stick around.

The rest of the turn was uneventful, with LMG squads rolling around on the ground as machine gun fire flew every which way. The Maxim ran behind the hill, and I wondered whether the Zis crew had actually brought live shells to the battle or left them all back at the depot.

Turn 7, 8, and 9 I shall deal with all at once, because they weren’t very exciting. The LMG squads lay on the ground for these three turns while the sound of tearing calico echoed out across the battlefield. By turn 9 Andrew decided to make a move on the Maxim with the Panther, but that was wholly uneventful. 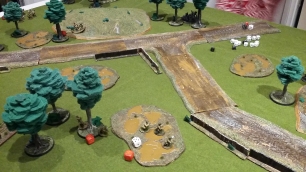 For my part, it turned out the Zis crew had actually brought some live shells! In turn 7 or 8 I finally managed to hit the MG-42, obliterating it. Then, it turn 8 or 9. I hit the Pak40, killing three of the four crew and causing the last to quit the field. 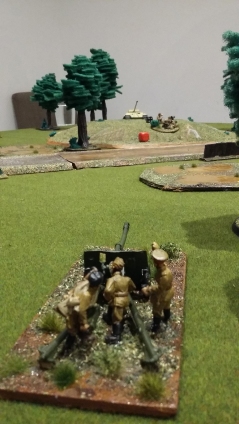 Finally, on the right flank, after two good turns, the conscripts spent the rest of the battle laying down.

I was a little worried early in the battle when my right flanked look a bit dubious, but as it turned out it was a very solid Soviet victory. With two units having moved off the table, and having destroyed six German units, I netted 12 victory points to Andrew’s 2.

The poor performance of my Zis guns Did Not Impress me. Of the 16 shots they took between them, they only netted two hits! I really regretted not using indirect fire by turn four. For Andrew, his Panther obliterating a squad was very impressive, and his MGs did the job, but his left flank folding was decisive.