Over the past few weeks I’ve been working on the next buildings for my Infinity snow board. They’re now complete!

I built two L shaped buildings and another raised square building. In addition, I finally got my armoury/objective room building painted. 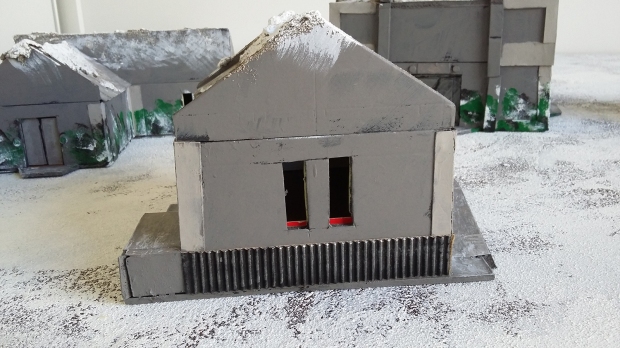 The two L shaped buildings are also mirrors of each other. I gave this one a camo pattern along the lower half of the wall. Sponge on green fairly heavily. Then, just dabbing, sponge on white and last black.

I like how they turned out and they give me more than enough to have a full table of snow themed terrain, although I still could do with themed scatter.

The weekend been being a long weekend, I set up a table and had some mates around to demo Infinity. Two 150pt games that were short and brutal.

For some reason I feel motivated to work on my American Civil War Union forces, despite the lack of opponent. I still need another box of infantry and artillery each, but I’ll focus on getting painted what I have first then get those.

With the cricket season over I might also see about getting some games of Bolt Action too.

So until then, happy wargaming!