With my mate back from the States it’s time to head back to the Eastern Front during late 1941 for some Operation Barbarossa in Bolt Action.

The Table and Mission 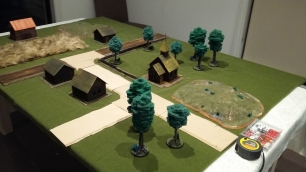 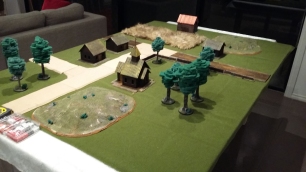 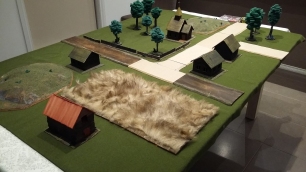 The Germans would be advancing up the road to the village, which they would seek to encircle. The two road sections either side of the village in the Soviet deployment zone were the objectives. The Germans just had to hold one uncontested to claim victory – a modified version of Point Defence in light of the 6’x4’ table and 600pt forces. 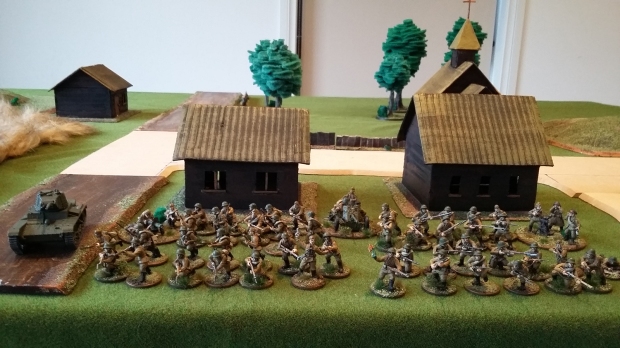 Four rifle squads: 12 men with AT grenades; 11 men; and then two squads with ten men each 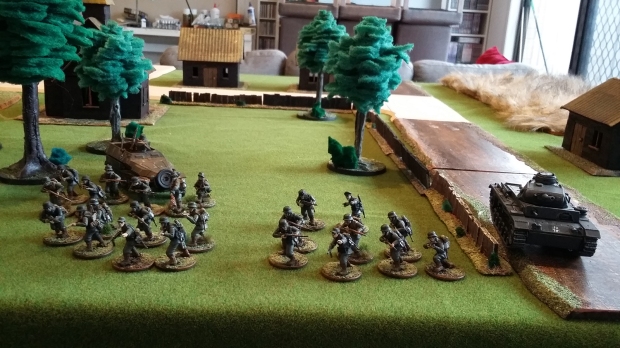 1st Lieutenant with one staff member (Veterans, both with rifles)

Two Heer infantry squads, one 8 man and the other 7 man, both with NCOs with SMGs (both regular)

Heer pioneer squad with 7 men including a flamethrower (veterans) 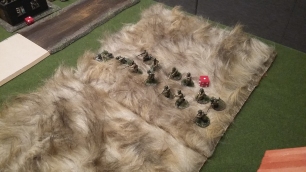 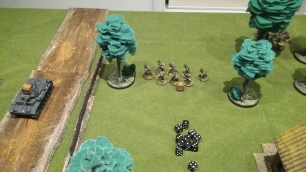 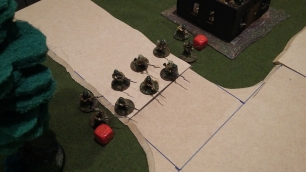 Turn one involved things moving. The eight man Heer squad came on and moved into the woods on the right. The seven man squad moved into the centre. The Panzer III came trundling down the road and fired on the Maxim, doing nothing. In response my T-26 came on and drove up into the field, fired on the Panzer and missed (I rolled a 1. The T-26 was very good at rolling 1s). The halftrack came on the far left and likewise the German command squad. The pioneers went down. My other moves were to run the 12 man squad up; move my AT gun onto the road to face off against the Panzer III; and move my other 10 man squad on and up the road. The Maxim and 11 man squad both rallied and got rid of their pins. The mortar tried but failed to range in on the Heer in the woods and the command team went down.

Turn two and my AT gun fired and missed the Panzer III. In response it opened up its MGs and scored exceptional damage, killing the gun – first blood went to the Germans! On the right my squad on the road ran up ready to assault the church in the following turn. A move which predicted the Heer in the centre’s moves as they shifted into the church. In the process they tripped my MG and 10 man squad in the building which I had put in ambush. They managed to pick off a couple, which was nice. My mortar fired and missed the Heer in the woods again, which then moved up slightly. On the left the halftrack advanced and gunned down a couple of Soviet riflemen. It was then a game of Who Gets the Next Die. It was me and I decided putting the squad on the left in ambush was the best response to the pending BBQ. Unfortunately the dice didn’t agree. With the pin from the halftrack MG I had to take an order test, which I failed on an 11! The rifle squad went down to the delight of the pioneers. They jumped out their transport and started cooking. I can’t remember how many riflemen died, but an additional four pins were added (taking the remaining squad to 5) and they well and truly did not feel like sticking around. Another Soviet unit destroyed! Meanwhile our armoured units continued to be Very Useless. The Panzer III did nothing to the Maxim and the T-26 rolled another 1 to hit the Panzer. 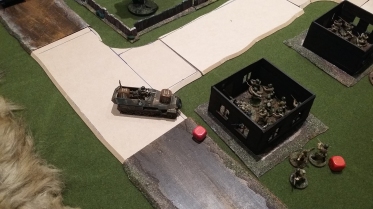 Turn three and I dropped mortar shells on the Pioneers scoring six hits! Unfortunately I followed that up with three ones, I still managed to kill three pioneers though. They passed their motivation and hoped back in the halftrack which then sped across the field to the left house. On the right I assaulted the church and kill the Heer squad inside to a man, I took four casualties in turn. The Heer in the woods then shot at me, managing to pick off one rifleman. The T-26 was, yet again, useless when it rolled another 1, this time to hit the halftrack. The Panzer III tried for the T-26 but joined the 1 club. Units in buildings just kept their heads down. 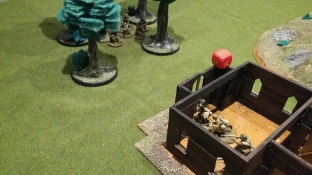 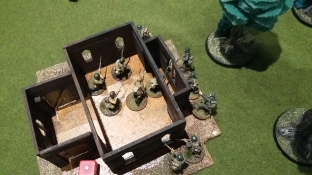 Turn four and Han’s House of BBQ saw the ten man squad with the Maxim burnt alive or running. In response my command team popped their heads round the corner and gunned down two more pioneers – including scoring exceptional damage and ending the flamethrower’s run. The other two stuck around. My T-26 fired and actually hit the Panzer III, but only scored a glancing hit that immobilised it. In response the Panzer III shot at my T-26 and rolled a 1 again. My mortar then lobbed shells at the Panzer and hit, but failed to do anything. Over at the church the Heer assaulted and cut the riflemen down, but lost four in response.

Turn five and the pioneers hoped back in the halftrack and then proceeded to murder my command squad. The German command started running up the field too. My Maxim repositioned out the building to defend the objective but was gunned down by the Panzer. I chose to keep my T-26 steady and fire on the Panzer III (its view was obscured if it moved to the objective). My mortar hit and did nothing to the Panzer. On the right, the Heer entered the now vacant church and my remaining rifle squad did some ineffective shooting in their direction.

Turn six and the situation did not look good. The pioneers jumped out the halftrack and assaulted my T-26 scoring a Fire result. Accordingly my T-26, having not acted yet, automatically went down but at least it didn’t flee. The German HQ joined the halftrack on the objective. My mortar did a world of nothing. I then had to make the choice of whether to re-position my rifle men, or ambush to stop the Heer in the church advancing. I decided to reposition. This allowed the Heer to move up, but they were not yet to the objective.

We rolled and scored a turn seven – good for me! Unfortunately the Germans got the jump. The Heer moved up and shot at the mortar, scoring two kills. The remaining man stayed around but when ordered to advance to contest the objective he decided to cower in fear! On the left my T-26 moved to put itself on the objective and took out the halftrack. The pioneers tried an assault again, but had no success. The German command then shot at and killed a couple of riflemen. My last order dice and I was to advance my riflemen and take out the three Heer to the right. They had to make an order test though and what do you know, they decided to cower too! And so ended the battle, with the Soviets trying to hide on the ground!

It was a close game and with more luck on my order tests I could have held the game at a draw with the objectives contested but held by no one. I was probably a little aggressive on the left and at the end there I should have held my riflemen in ambush in the house. It seemed the better choice to put them in a situation where they could threaten either objective rather than just one, however. A good game though.

We’ll be back in a fortnight’s time with another Barbarossa themed game. Until then, happy wargaming!