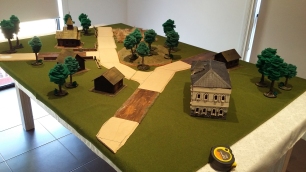 We rolled Top Secret for the mission. The objective was placed at the road intersection near the large building and was represented by a BA-64.

The crew had conducted some reconnaissance, but was knocked out. Our forces would be racing to the site to collect the vital intel and extract it from the AO.

Soviet (all regular, except the rifle squad)

1st Lieutenant with one staff

Rifle squad with 12 men and AT grenades

Two LMG squads with ten men, including one LMG

German (Pioneers are veteran, Hanomag is inexperienced, rest are regular)

1st Lieutenant with one staff

Two Heer squads with ten men, including LMG and NCO with SMG

Heer Pioneer squad with seven men, including a flamethrower

You will note that the Soviet list is the same I took in my last game against Andrew, but swapping out the sniper for the MMG. I also remembered that the third LMG squad didn’t have an LMG.

I let my brother pick which army to play after the field was set up, mission rolled, and objective placed. He chose the Soviets. My brother also won the roll off and elected to take the side with the forested hill.

Turn one and I pulled the first dice. I decided I would end the battle as quickly as possible, electing to bring my Hanomag on and Advance up the road to the objective. In response, my brother brought on the T-34, but its main gun went sailing over the Hanomag.

Most of the rest of the turn was fairly uneventful movement onto the table. I brought my two Heer squads on either side of the road, with my Lieutenant behind the one nearer the centre. My brother brought the Maxim on and ran it into the house, the Zis-3 on near the road, but hiding behind the hill from the Panzer IV which had trundled on and failed to land its main gun on the T-34.

The LMG squad with no LMG came on the Soviet left (my right), and one of the ones with an LMG moved on behind the forest. My brother kept his Lieutenant and Rifle squad Down.

With one dice a piece left, I pulled my first and ran my Pioneers out the half-track and collected the objective. My brother brought his final LMG squad on and some sharp DP-28 shooting saw one Pioneer dead. 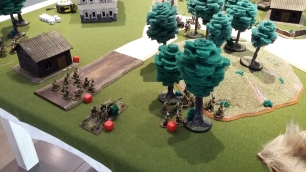 Turn two and I again pulled the first dice. I elected to Run my Pioneers, who just barely passed their order test. The next four dice went to my brother. The T-34 acted first, moving up and hitting the Hanomag, but only managing a Crew Stunned result. The T-34 also opened up with its MMG, picking off another Pioneer. The Zis-3 tried for a shot on the Pioneers, but missed, while the Maxim put more heat on the Pioneers and killed a third.

I moved my Heer squad behind my Pioneers up to collect the objective from them. My Lieutenant also shifted up beside them. I wasn’t really squad what to do with the other Heer squad, so they went into Ambush. Finally, my brother moved up the rifles only LMG squad, brother on his Lieutenant near the Maxim, and the Rifle squad came on the other side of the battlefield and ran along the road.

Turn three and my luck continued with the first dice, again! I ran the Heer squad with the objective back towards my deployment edge. In response my brother moved his Lieutenant and ordered the T-34 and rifles only LMG squad to Snap To. Both advanced and opened fire on the Heer squad with the objective. Three men dead and a pin later, I moved my Panzer IV into action. My machine gun fire was useless, but my main gun hit the T-34, but only just. A six on the damage roll put the Soviet tank On Fire, but my brother passed the morale test and the tank fought on.

Next Zis-3 tried for a shot on the Heer with the objective, but missed. Meanwhile the Rifle squad continued to run up, LMG squads with LMGs advanced and added another pin and two more casualties to the Heer squad. The Maxim didn’t have any shots, and my second Heer squad were Rather Ineffective. My Hanomag decided just staying put was a Good Idea, while the Pioneer’s Rallied and cleared all their pins. 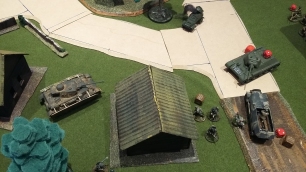 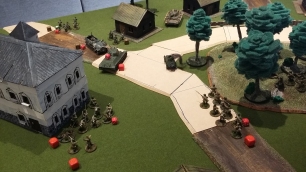 Turn four and what do you know, I drew the first dice. I ordered the Heer with the objective to Run and they promptly passed their order test and got the hell out of the AO. With the intel secure, victory went to Germany!

Basically it came down to me having a transport. Without it, the Pioneers wouldn’t have been able to reach the objective turn one. That’s not to say it was a done deal from the start. The order of dice pulled also went strongly in my favour. If any of the Soviet units had been able to act sooner in turns two or three, I likely would’ve faced more pins and casualties which would have severely impacted my ability to get out with the intel.

It was a fun game though and both of us enjoyed it. It never ceases to impress either of us how smooth the Bolt Action rules system is every time we play.