The Easter long weekend and my mate Tom was keen to catch up, so what better time to (finally) play some more Flames of War? 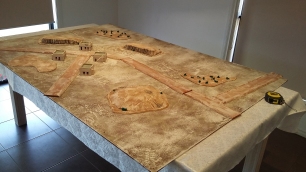 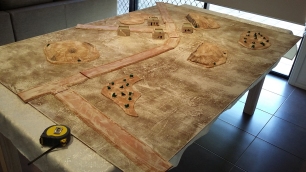 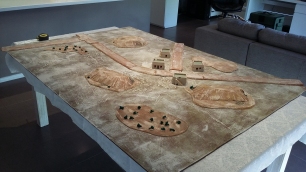 I rolled up engagement for the mission. Tom won the roll off and was the attacker. Objectives were placed more or less opposite each other. My side (the one with the two ridges) had one behind the rough terrain on my left flank, and the other just behind the ridge in the centre. Tom has one just over the hill and the other I placed near the road on the other side of the field.

We just ran with everything we had (only my force fits an organisation chart).

Kingforce armour platoon with three Churchill IIIs – this platoon wasn’t actually part of the force organisation chart, but we were doing a fun “use everything” battle, so it came under the company’s command 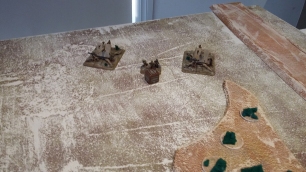 I deployed my Flak 88s on the objective on my left flank and my second Panzer platoon behind the ridge in the centre. Tom positioned a platoon of Shermans in the centre of the field and the Churchills on the road.

I had first turn and did a big fat load of nothing. Meeting Engagement meant I couldn’t call in air support. Reserves were on delay. I didn’t want to sneak my Panzers out yet, and I made the call that the Flak 88s couldn’t fire (everything for me was supposed to count as having moved, Flak 88s are immobile. So I considered they’d been towed on and set up). Tom similarly did little, moving up his Shermans and Churchills. The Shermans opened fire on the Flak 88s, but were in effective.

Turn 2 and I kept my Panzers still again. My Stukas came in and wrecked two Churchills, while my Flak 88s bust open a single Sherman. Tom’s turn and the lone Churchill stuck around and moved up. The Shermans returned fire on the Flak 88s, but again were ineffective. 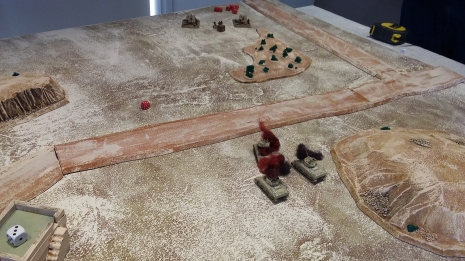 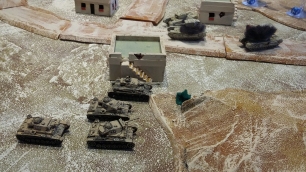 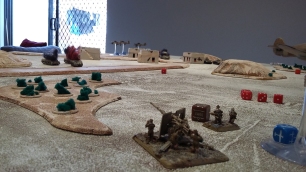 Turn 4 and I still had no reserves. My Stukas came in again as I moved my Panzers up. The Churchill took a hit from the Stukas, but somehow wasn’t knocked out. The Churchill failed to remount, and the Hurricanes didn’t show up either.

Turn 5 and finally my first Panzer platoon showed up, driving in on the centre of the field. My Stukas were back as my Panzers continued their advance. Once more I just couldn’t crack the Churchill. British reinforcements also arrived in the form of two Sherman platoons (including the HQ). They came in from the corner opposite the Flak 88 though, which was not ideal. The Churchill remounted and decided to advance, opening fire and scoring one kill on the second Panzer platoon. Unfortunately the Shermans were out of range. 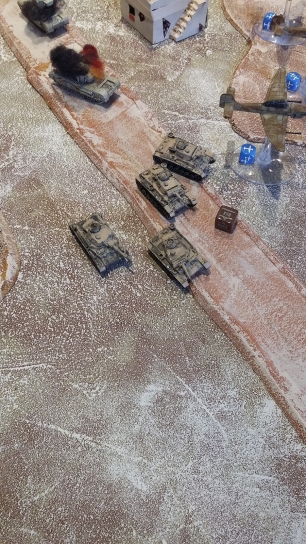 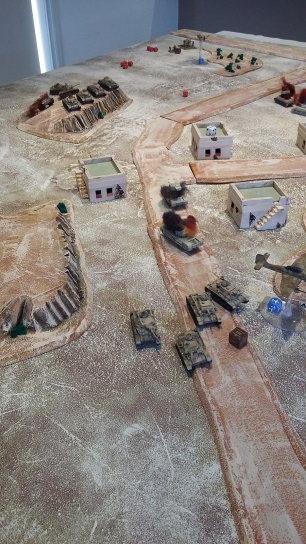 Turn 6 and my Panzers made it onto the objective, if I started next turn with them on it I’d end the battle. My final lot of reserves, the command platoon, showed up in the centre of the field. Meanwhile, my Stukas again tried to knock out the last Churchill but failed. The second Panzer platoon moved up to engage it but were likewise ineffective. Meanwhile my Flak bailed a single Sherman. The Sherman failed to remount while the others moved up. Unfortunately for me the Honey Stuarts not only showed up, but arrived right in front of my Panzers. The Hurricanes also came back for another strafe. The dice were not in Tom’s favour though and by the end of the shooting phase, only a single Panzer from the first platoon was destroyed. 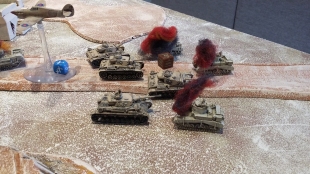 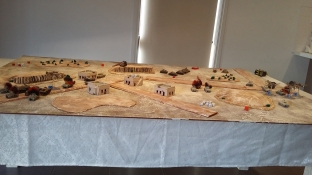 Turn 7 and I turned everything in the centre towards the Shermans on the left. My Stukas were back, this time on the Shermans. When the guns stopped firing, one of the Sherman platoons and the Honey Stuarts were all smoking wrecks. The battle was all but over, but Tom shifted up his Shermans (the bailed one remounted) anyway. The Shermans failed to do anything, but the Churchill took out two more Panzers and the last Panzer from the first platoon quit the field.

Turn 8 and my second platoon was on the far right objective uncontested. Victory to Germany! It was a good battle, though the dice were definitely in my favour. Tom was a big fan of snake eyes, and he really could have used one of the Sherman platoons on the other flank.

I’ve a game of Bolt Action, and hopefully some SAGA too, teed up for next Saturday. In addition, Thursday night is Guild Ball. Finally, I finished Kraken yesterday and Veteran Siren today. Unfortunately Sakana’s blister was baseless, so I’ll need to solve that problem before I can do any work on him.