Word. Just a quick update, not too much went on this week. I’ve done the smallest amount of work more on my building and road surfaces. The roads won’t take much to finish, but the building still requires the roof to be assembled, then I need to paint the exterior and the roof, after which I will do the details. I’m not 100% I can get it done this weekend, but worst case scenario is that everything is painted, but it lacks details. Also doors. Need to do the doors. They count as details, though that’s not what I was thinking when I typed “details”. True story.

Things that have occurred in the past week: played a game last Sunday – the most intense game of Infinity I’ve played yet; and I painted my Chasseur with adhesive launcher. 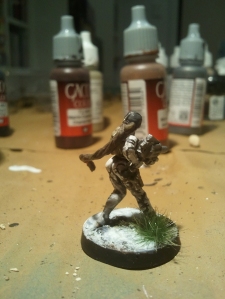 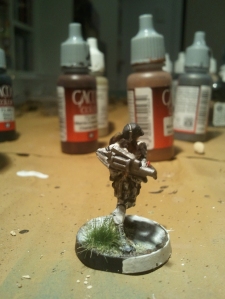 Nothing all that special here. She’s a Chasseur. She’s armed with an adhesive launcher. Standard snow camo colour scheme – Dead White with German Grey ‘C’ and ‘S’ shapes randomly placed, in the curve of which is painted Stonewall Grey, and then thin(ish sometimes) Black splinters that break the German Grey lines (and sometimes I put in white space to break it up). She’s showing a lot of flesh. Entirely practical colour scheme. I see no problems with this. I’m also looking forward to deploying her in the future.

Courtesy of http://www.ftrain.com/cgi-bin/l_operation.cgi?num_ops=20 the above name was generated for the battle.

Above we have the battlefield (the quality of the images leaves a bit to be desired, sorry about that), shot on the left is the view from the Tohaa side, shot on the right is the Japanese Sectorial Army (JSA, my force) side. We usually do a real clustercluck of scenery. I mean a real clustercluck. On a recommendation, however, and following on from the discussion on the Infinity Australia page on Facebook about terrain density, we limited ourselves to six buildings. My road pieces run right through the middle of the field (I’d just finished gluing the sand, it was yet to be sealed), which worked wonderfully for the mission we rolled (Supply, is that what it’s called? Three tech coffins across the centre line, 1p for each supply box held at the end of the game, 3pts for having more than your opponent, 2pts if your opponent has none, 1pt for each of two classified objectives).

I was acting first and decided to focus my efforts on the left of field (to me, so in the left image that is the closest side to the camera), moving up my Keisotsu to open the tech coffin (represented by the unpainted console) and grab the supplies while the Kempeitai moved up to support from behind the planter. Tohaa turn one, triad on the left lost (unconscious) a member running through the open to the Kempeitai, but the Kempeitai was taken down (unconscious) an order later. My raiden popped up (top of the building the left corner of my deployment, the two storey square one), but missed the spitfire inside the building opposite. A Tohaa sniper then popped up on the other side of the field and took a shot, but missed, then shot again next order. We worked things out that I couldn’t hit because I was at -12 for reasons I’m not sure of, because in hindsight I think it should’ve been -9. Anyway, Raiden lived and went prone. With the Tohaa sniper recamoing with the last order.

My next active turn I moved my Eisetsu Butai up and secured another supply box on the far right. My Raiden popped his head up and fragged the spitfire this time. Tohaa active turn and my Eisetsu went down (unconscious) to the second spitfire (behind the shipping crates in the Tohaa side on my right flank) and although my Ninja (who appeared on top the building opposite the crates) hit with DA ammunition, both wounds were saved and the model volunteered to fail his guts rolls and go behind the crates. Next the Tohaa sniper appeared and shot at the Raiden, who went down (unconscious), but my Ninja took out the sniper (dead) in his ARO. Next the Tohaa remote tried to make its way to heal the unconscious triad member, but was taken out by the Ninja. Unfortunately the Spitfire came to bear of the Ninja and ended his good run via some dark magicks (primarily a bad roll for me) and he died outright. Some other things happened next, but I made my mate realise he’d used too many orders, so we wound back the clock and the ninja’s death was the end of his active turn.

My third active turn and I had two orders, plus Lt and was approximately stuff all points off full retreat (less than 10). I used all my orders on Asuka to gun it to the supply box by the unconscious Eisei, grab it, and gun it to behind the footbridge on my side (where my Oniwaban was in hidden deployment). Though the spitfire had an ARO, it missed. Tohaa active turn and the spitfire fails again thanks to bad rolling and a successful dodge from Asuka. Then in came the airborne deployment, which landed successfully. Asuka turned, and then when she was shot at, she used her flamethrower. Unfortunately she went down (dead) and was unable to kill her adversary. But my mate had run out of orders, with his last leaving him a short move away from the supply box (which he’d need a short skill to pick up anyways) and the Oniwaban appeared right next to him at the end anyway (but failed to strike him down).

Aftermath: neither of us completed either of our classified objectives. I held one supply box (1pt), had more than my opponent (3pts) and my opponent had none (2pts). End count: JSA 6 vs Tohaa 0.

The result reads as though I trounced my mate, but I did anything but. The game was intense till the end and on a real knife edge the whole way. The open field allowed our snipers to shine and put real uncertainty around crossing the open. We agreed the thing that lost it for my mate was sitting back and trying to set up the cover over the tech coffins without making the offensive moves to secure them (his plan was to let me open the coffins then swoop in and steal). It was an awesome game though, and we decided not to do another, but teach another mate the basics so he could get right into things when his Operation Icestorm box arrived.

All in all, a great weekend. Anyway, hobby things aren’t going to get done if I keep typing on here, and I still need to do some gardening and it is already almost midday. Gotta get on it son! Enjoy the weekend!